black animation network: How Django Unchained Should Have Ended and BEGAN! ...


Django Unchained - I Like the Way You LIE Boy ( Not YOU - Tarantino)
Django Unchained bothers me for so many reasons beyond the 'N' word. The 'M' words bothers me more (Mass-Minded, Mediocrity masquerading as a Monumental Movie!)
I took the liberty of interviewing a few people right after we saw the film. I still haven't spoken directly to anyone who could actually, reasonably and/or intelligently explain if or why they liked Django. Even further, to submit that it changed their lives in a positive way or is relevant to their lives at all.
It could be simply coincidental that killings in the US have escalated (particularly but not exclusively in Urban communities) since the movie's debut. It could also be coincidental that many people went to see it in record numbers hoping to support Kerry Washington, Jamie Fox and Samuel L. Jackson and to hopefully see them in powerful award winning roles that elevated their place in film history. Unfortunately; as it was written, their roles were primarily bit characters. Jamie's Django showed no depth, Kerry's Broom Hilda barely spoke (I had to watch Scandal just to get that character out of my system) and Samuel Jackson's was a caricature-of-a-caricature from a Boondocks character made people laugh out loud, but at what? None of them got a nomination for anything significant (and honestly they shouldn't have – they were given very little to work with). Yet, Tarantino gets awarded a "Best Screenplay" OSCAR? Really? I guess when you can take a censored 'C' movie from 1966, turn it into 'B' movie MONEY-MAKING MACHINE fifty years later by casting 'A' List Actors and Advertising to sell it as the greatest thing since ROOTS and sugar cane...you should have won something. The way he has so eloquently written in the 'B', 'N' and 'F' words, celebrated the most psychopathic violence and has borrowed 20 year old scripts – cut them up, thrown them on the floor and let studio interns put a screenplay together for him for the most part throughout his 'artistic' career...The Academy Awards should create a new award just for him...'The Pimp Award'. Simply because that's what pimps do. Just asks anyone whose been pimped. They really can't tell you why they were there (Reference: My earlier Django Interviews). Can you see him decked-out in Urban Pimp Gear that could make Huggy Bear blush (Just checkout his attire when on a 'urban' show doing interviews lately and when he's on a 'non-urban' show past and present? Simply because that's what pimps do.
Then again...Hollywood already owns that award. 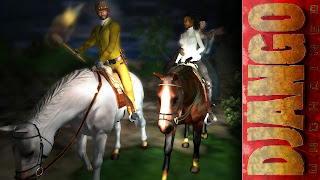 Posted by black animation network at 10:37 AM